Becoming an EMT or emergency medical technician is a calling. This is a job that comes with its own rewards, since those who are qualified to do it help people in emergency situations. You might think that because an EMT’s job is so important, that their salaries are very high, but this actually depends on the state in which they live and work. Some states, with a very high demand for EMTs, do pay more while others pay a lot less than expected. An EMT has to reach an emergency site timeously and help to transport those who are ill or injured to the hospital. They are responsible for people’s lives, which is why many of them choose to work in states where they are paid well.

Becoming an EMT requires a certain amount of training and a formal degree, though this differs from state to state too. An EMT salary by state will differ just as much the qualification they need, and some states may pay as low as $10 an hour. Some states also pay annual bonuses to EMTs, while others won’t. Of course, performance is a factor too, thus the more experience you gain, the more you will be paid, just as in any job. In their first year of working, an EMT will likely be paid no more than $25 000 a year, while when they gain more experience, they can make up to $60 000 a year. Of course, this also depends on whether they work for a private or state institution.

The Levels Of Becoming An EMT

As with almost every other type of job, an EMT gets more money as they gain more experience. Typically, they will reach one of three levels, either basic, intermediate or paramedic. These all have an impact on the salary they get. Generally the salary can be broken down as follows:

These all depend on the state in which you live, and the institution in which you work. The general figures shown above can actually vary greatly depending also on where you got your training and certification. If you were certified in New York and have decided to work in Ohio, you may be surprised at the salary difference between the states.

Salary is also dependent on what you do on a daily basis. For some, it may be helping people take medicines or supervising them during procedures, while others may have to go out to emergency situations constantly. Before you even consider salary though, you need to qualify as an EMT, which requires at least two years of training and a thousand hours of practical instruction.

Conditions That Affect An EMT Salary By State

Generally, an EMT’s salary in whichever state they are in is affected by certain conditions, such as supply and demand. In a state where there are a lot of jobs for medical professionals, but not many people to fill those jobs, there will be a higher salary offered. Also important is whether the candidate is working for a state or private hospital. The highest paid EMTs are those who work for the government of their state. Being able to stay in a job for a certain length of time is also vital, since an employer is more likely to up your salary if you have been with them longer than three years. 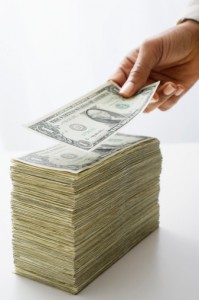 Because an EMT has the responsibility of dealing with emergency calls, the have to have a number of characteristics and these will definitely affect not just the salary, but also the likelihood of promotion and recognition. These include:

An Analysis Of EMT Salary By State

If you were to consider the statistics of what states pay EMTs, you might be surprised by the differences between them. In Pennsylvania for example, the increase in the number of EMTs has left the salaries relatively low, at an average of about $28 000 a year. In Alaska though, the small number of EMTs has pushed this average salary up to $53 000 a year, almost double what those in Pennsylvania are making. And yet, this is not the lowest. The state with the lowest average salary is actually Oklahoma with an average of about $11 an hour, or $23 000 a year. Of course, these salaries also reflect cost of living, so one can assume that the cost of living in Alaska is significantly higher than that in Oklahoma.

What is important to note here too is that metropolitan areas pay their EMTs more. What is a metropolitan area? This is defined as a large and busy city, and a list of metropolitan areas can be obtained on government websites. New York for example, is definitely a metropolitan city due to its sheer size and population density. This means that should you choose to work in New York, your salary would be exponentially higher.

Surveys have been performed to assess which states are the most profitable for an EMT to work in, but remember that as your salary goes up, so does your cost of living, as anyone living in New York can attest to.

In Nevada, for example, the average EMT salary is nearly $36 an hour. This is the highest paying state closely followed by Washington and Maryland, but due the size and population densities of these cities, the costs of living are high too. Alaska, as previously mentioned, also pays well and is in the same category at Delaware, Hawaii, New York, Colorado and New Jersey.

As for those that don’t pay particularly well, Oklahoma tops the list with a sad $15 an hour. Also on the list of low paying states are Montana, South Dakota, Kentucky, Kansas, Mississippi, Wyoming and West Virginia, not necessarily in that order. The fact that the lowest paying states are mostly southern also brings to the forefront the fact that these are the states in which cost of living is not as high, and thus higher salaries are not as in demand.

However, if you want to make your mark, you need to go wherever the jobs are open to you. The basic rule of supply and demand explains that wherever there is a higher demand than supply, the costs will go up. Conversely, a lower demand with higher supply leads to lower cost. Thus, a paramedic who chooses to work in a state that has a higher demand for EMTs will make more money, since the simple rule of EMT salary by state is that more demand equals more salary. An example of these states is Pennsylvania. As previously mentioned, this state is simply crying out for EMTs, as are California and Illinois, and for those lucky enough to work in these states, their salaries will reflect the demand. Also on this list are Ohio, Georgia, Florida, New York and Wisconsin.

Some states have barely any job openings at all, such as Wyoming which can only boast an average of ten openings for EMTs yearly. Also coming in at ten are Vermont, Alaska and North Dakota. Because these are states where it may be higher for paramedics to get a job, they are the states that paramedics tend to avoid.

Getting A Raise In Salary

One of the best parts of being in a job for a long time is that it comes with certain perks, not the least of which includes an eventual raise in salary, but sometimes, this doesn’t happen on its own. As an EMT, you may have to put certain things in place to get the salary you feel you deserve, and this includes knowing your own value. Some of the techniques that you can use include:

Being an EMT is a tough job and takes a lot of patience and a lot of stamina. Unlike any other job, it is one where people put themselves in the position of dealing with emergencies not juts daily, but sometimes hourly. This can be very stressful, and so it is vital that EMTs take the time they need to relax too. You may be tempted to work double shifts or take on someone else’s shifts for the money, but be advised that because this job is physically and emotionally draining, it requires you to be able to separate yourself from the chaos.

Sadly, the state of affairs is that EMTs are not paid enough for the vital jobs they do. While we pay doctors a lot of money, and they deserve it, the EMT is generally the person who keeps a patient alive in an emergency. There is no one who can deny that the job they do is exceptionally important and thus, that they should be earning a lot more money. For some, this increase in earnings come with a move to another state, while for others, it comes as they build up their experience and knowledge.

Deciding to become an EMT means thinking about having a salary that allows you to simply survive, and may not make you a millionaire. However, the intense job satisfaction may be enough for some, and there is plenty of this to go around. However, knowledge is a powerful thing, and having a good understanding of EMT salary by state means that you know where you will be most valued. Though this may not influence you much when you are just starting out, once you gain some experience it is a vital piece of information.

Also important to remember is the job openings available by state. After all, if you don’t know this, how can you expect to increase your odds of finding a job? Remember, too, the law of supply and demand. More job openings means more demand, which is good for you in the long term.

Becoming an EMT or paramedic is a calling and requires the kind of person who is committed to helping people and to making a better world. However, having a certain degree of knowledge can lead to increased job satisfaction, which means you serve people better in the long run. Knowing EMT salary by state is vital if you are to know how much you are worth to potential employers and how you can increase that figure year after year, while still doing the job you love and doing it well.

Rehabilitation vs. Restorative Nursing Toward A Healthy Life

What You Need To Know About The Nurse Aide Registry

Medical Assistant Scope Of Practice Varies In Every State