A Short History Of IFSW

An international Executive Committee is democratically elected at a General Meeting of members every two years. The committee is made up of a President, Treasurer and Regional President and Member-at-Large for each of the six regions, being Africa, Asia – Pacific, Europe, Latin America and the Caribbean and North America. The permanent Secretariat, which was established in 1956, is currently based in Switzerland.

Apart from the special consultative status that IFSW has with United Nations Economic and Social Council and its accreditation to the International Labor Organization, UNICEF, the Council of Europe and the European Union, it also has many other partners:

Ethical awareness is fundamental to the practice of social work, and the commitment to act ethically an essential aspect of the quality of services offered. The IASSW and the International Federation of Social Workers promote ethical debate and reflection in the member organisations, in the schools of social work, among the providers of social work in member countries, and among social work students. Some of the ethical problems and challenges that face social workers are endemic to specific countries, and others are common. The joint IASSW and IFSW statement seeks to encourage social workers across the globe to reflect on the dilemmas and challenges with which they are faced in order to make ethically informed decisions as to how to act in each particular case 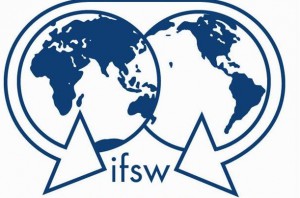 Some of the problem areas include:

The Statement of Ethical Principles uses the definition of social work adopted separately by IASSW and the International Federation of Social Workers and agreed upon in 2001. This definition stresses principles of human rights and social justice. The document makes reference to the various declarations and conventions on human rights that are relevant to social work, a statement of general ethical principles under the two broad headings of human rights and dignity and social justice, and some basic guidance on ethical conduct in social work.

The Statement of Ethical Principles covers the recognition of rights that are accepted by the global community and documents that are particularly relevant to social work practice:

Human Rights and Human Dignity
Social work is based on respect for the dignity and constitutional worth of all people, and the rights that follow from this. It is the duty of social workers to uphold and defend every individual’s physical, emotional, psychological, and spiritual integrity and well-being. This means that social workers must:

Social workers have a responsibility to promote social justice in relation to the people with whom they work as well as in relation to society generally, which means:

The national organisations who are members of IASSW and the International Federation of Social Workers have a responsibility to develop and regularly update their own ethical guidelines so that they reflect those contained in the IFSW/ IASSW statement. National organizations must inform schools of social work and social workers about these codes or guidelines.

It is incumbent upon social workers to act in accordance with the ethical code or guidelines current in their country, as they generally detail guidance in ethical practice specific to the national context. The Statement does, however give general guidelines covering what social workers should and should not do, which can be used as a template from which to work locally.

Members in this category of IFSW receive:

Advocacy for the promotion of social justice or social work on the members’ behalf, in their own country and/or region, internationally and/or within the United Nations

Anyone that wishes to show their support for the International Federation of Social Workers may join as a Friend of IFSW.

What Are Your RN Salary Expectations?

Facts About RN To BSN Programs

What Can A Certified Nursing Assistant Earn?

What Are Accelerated Nursing Programs?