To become a male LPN you need to follow the same path as a woman would to become a female LPN. There is no reason why men cannot be licensed practical or licensed vocational nurses. However there does often tend to be a certain amount of prejudice in various forms against men. Consequently the number of male LPNs in the profession is very low, making up only about 8% of those employed in this line of work.

Male LPNs are exactly the same as female LPNs, there just tends to be fewer of them, meaning that they are remarked on more often when they do show up. There is no reason why a man cannot complete the same educational and clinical requirements as a woman and qualify to write the NECLEWX-PN examination at the end of their course. The biggest problem lies in the fact that men tend to view the profession as being for women only. Women are equally guilty of doing this, however, and they also tend to look on men who become nurses in a strange way. However, as time passes, people are becoming more and more accepting of changes in gender roles and a more comprehensive representation of both men and women in all areas of the employment sector. Consequently we can expect more and more male LPNs to appear in health care settings over the foreseeable future, just as we see more and more women in positions that were previously ‘reserved’ for men. 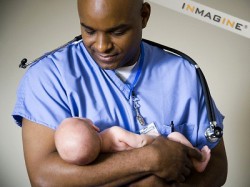 According to payscale.com, although men only make up 8% of the licensed practical nursing profession while women make up the other 92%, the do tend to earn very slightly more than women at a rate of about $15.33 – $20.42 in comparison to the average rate for women which is at around $15.30 – $20.25. The difference is, however, negligible.

Men who have the desire to become involved in the nursing profession are often hindered in achieving their aims, mostly due to the many myths and prejudices surrounding men who become nurses. In many other walks of life we have seen recently that the long held and well established prejudices and norms are not, in fact, normal and that there is no reason for us to respond to certain groups of people in the way that we do. The same general principle can be applied to male LPNs: there is no reason to look down on men who become licensed practical nurses. Anyone w ho takes a moment o consider the situation will realize this very simple truth immediately. Even in cases where prejudice is not openly displayed, people may still at a subconscious level feel that a male LPN is in the wrong place. These thought patterns represent the traditional way of thought in our society, and that way of thought is slowly but surely changing. While it changes workers in the health care professional need to take the initiative regarding the concept of the male LPN and start transforming their way of thinking. There are a number of myths regarding men who become nurses. We will have a look at three of them and consider them in detail.

Myth 1: Nursing Is A Women’s Profession

As a society we are sued to dividing professions up into those that men can do and those that women can do. However in recent times we can see that this is changing. Initially the changes were taking place in only one direction:

However this ideal of feminism is slowly giving way to a more generally encompassing idea of equality, i.e. anyone can do any job. This means that:

A growing acceptance for this change of attitude can be seen in the fact that more and more men are becoming nurses. There are two interesting things to note in this regard:

Another old idea is that men and women differ in terms of their emotional make-up. This may be true and can certainly be observed to a certain degree in daily interactions between men and women. However a false premise is that the profession of nursing is better for a woman’s personality and emotional characteristics than a man’s. This is, however, simply not the case. As human beings we are all drawn towards a desire to help others. The desire to interact with others on a regular basis is not one that is only felt buy women.  Men in manly professions, such as firefighting, are drawn to that profession for a very similar reason as those drawn to nursing. People who are drawn to be doctors require very similar personalities and traits to those who are drawn to be nurses, yet the role of ‘doctor’ is usually considered to be more of a man’s occupation than a woman’s. There are many jobs that are done by men and women that involve an emotional component. Doctors are required to show empathy to their patients and have a natural desire to heal. So do nurses. Funeral undertakers (usually men) need to show the appropriate amount of sympathy to their clients. So do nurses. The examples are endless.

Another assumption about male LPNs is that they have become nurses simply because they could not make it through medical school to become doctors. This is not the case either. If you speak to any male LPN you will find that 9 times out of 10, becoming a nurse was their first and foremost ambition. Becoming a nurse is sometimes seen as a kind of ‘entry level’ position in the health care profession as there is the possibility of, over time, expanding your educational abilities and eventually becoming a doctor (although this is a long path usually taken by those who cannot afford to study be a doctor to start off with and those who did not consider a career as a doctor when they started studying). However this career path is one that is open to male and female LPNs. To assume that men who become nurses just want to be doctors is erroneous. In addition, it should not matter if their end goal is to become a doctor (although this is not usually the case) because it is an admirable goal to strive towards.

One thing that several male LPNs have noted in terms of doctors is that being a male nurse gives you an advantage when speaking with doctors. Doctors are also stuck in the old and traditional ways of speaking and therefore tend to interact with male nurses on a more respectful level than with female nurses.

There are a few hindrances and stigmas that do have some basis in fact, however:

The trick is to not take any of this personally. If a woman does not want you to nurse them because you are male, simply smile and fetch a female LPN to assist them instead. Do not react because it will not help your case. The only way for men to become more prevalent in the nursing profession is if they gain the confidence of the public by continually and respectfully demonstrating their competence in this l9ine of work at all times.

If we examine the statistics of the nursing profession we can see not only an increase in the number of men employed in this profession, but also a number of benefits and good reasons for why men should enter the profession:

Being a male LPN may sometimes feel like a very lonely state of being, especially if you work in a facility where you are looked on with suspicion or as someone who should not be there. However there are a number of resources available for male LPNs. For example you could make use of http://allnurses.com/male-nursing-student/, which is an online forum designed specifically for male LPNs. This is not the only forum of its kind. On this forum you can speak with and connect with other nurses who are men and share your experiences. In addition it is a very good place to turn to for advice in certain areas of your profession. Sometimes it will not be natural or easy to speak with your female colleagues (although this will depend largely on their attitude). Consequently, having an online place in which to share your thoughts and worries can make a substantial difference. In addition you do not need to reveal your identity if you don’t want to on these sites, making your interactions anonymous.

Being a male LPN is, then, a very real possibility for a man who wants to enter the medical profession in a serious way. The myths regarding male LPNs are all ungrounded and there is quite literally no reason why a man cannot be a nurse. Growing acceptance for this fact has resulted in a gradual increase in the number of men employed as LPNs across the country, and this increase is expected to continue.

Being A Male LPN

About Being A Child Social Worker

The National Association Of Social Workers

The Purpose Of An LPN Clinical

Get On The Fast Track From LPN To RN