When it comes to pharmacist vs pharmacy technician, many people do not know or understand the difference. When one goes into a pharmacy there are usually a few people in white coats behind the counter, and few of us know which of them are pharmacists, and which are pharmacy technicians, because to us it looks as though they are all doing the same job.

You will find pharmacists and pharmacy technicians everywhere that prescription drugs are dispensed. Although there are various settings in which they work, these sites all fall within two categories; hospital pharmacies and community pharmacies: 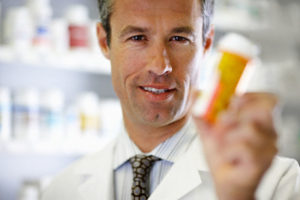 As the more senior of the two, the pharmacist is responsible for everything that is in and that happens in the pharmacy, including ensuring that all regulations are strictly adhered to. They must also ensure that every prescription is double-checked before being handed to the patient, and that each prescription that is sold is legal and valid.

Duties Of The Pharmacist

A pharmacist in theU.S.must earn a Pharm.D. Degree, which has replaced the Bachelor of Pharmacy degree previously required. A pharmacy is one place where a mistake could have lethal consequences, such as if an incorrect medication is given to a patient. The pharmacist must be familiar with all the medical problems of the patients and what drugs are used to treat those conditions, as there are many drugs with very similar sounding names.

Most pharmacists work in community settings such as a retail drugstore, or in a healthcare facility such as a hospital, mental health institution, neighborhood health clinic or a nursing home.

A Pharmacist’s duties include:

Pharmacists are looked upon as fonts of medical information and advice. In the pharmacist vs pharmacy technician scenario, it is the pharmacist that spends a large part of the day giving patients advice on their medical problems judging on their symptoms. They will sometimes offer over-the-counter medications and at other times they will refer the patient to a medical doctor. There are some states where pharmacists are even allowed to write prescriptions for commonly prescribed non-regulated medications such as mild pain relievers or antibiotics.

Duties Of The Pharmacy Technician

Apart from helping the pharmacist to prepare medications, the pharmacy technician may also:

In some communities and hospital pharmacies the pharmacy technician may also:

Pharmacy technicians generally work very closely with pharmacists, and their duties are therefore very similar in many ways. Both of them count, mix and weigh medications, and both deal with pharmacy customers, insurance companies and doctor’s offices.

Both the pharmacy technician and the pharmacist play essential roles in the pharmacy and have the same goal; the health and wellness of the public in general, and satisfied customers or patients. Both generally also enjoy very satisfying careers.

Although in the main the pharmacist and the pharmacy technician perform similar tasks, there are also some very substantial differences between the jobs. A pharmacist spends many years learning names of medications, their composition and their side effects. Only a pharmacist is allowed to note down prescriptions given and spelled out over the phone, and only a pharmacist can give a patient advice regarding a drug and its side effects.

Some states require pharmacy technicians to become certified whereas other do not, but a pharmacist must have a doctorate and be registered with the State Board of Pharmacy. One can become a pharmacist technician directly from school or after a short course, but a pharmacist has to study for 6 years before they can sit for the licensure examination.

In order to practice as a pharmacist, an individual has to complete some three years of undergraduate studies to attain a bachelor’s degree before getting their doctorate. A PharmD degree, or doctor of pharmacy, is a six-year degree, which consists of a four-year professional program involving academic training as well as internship experience, and two years of pre-pharmacy education. Once they have qualified, they need to complete a one-year internship under a licensed pharmacist.

Once an individual has completed all his or her studies, they must sit for and pass the North American Pharmacist Licensure Examination (NAPLEX) examination in order to gain licensure, and then register with the State Board of Pharmacy.

Subjects studied to become a pharmacist include:

Pharmacy education includes learning how the body works; how drugs work on the body; identifying and differentiating between medications; what disease or condition each medication is used to treat and how various drugs interact with each other.

As there are continuously new drugs beings discovered and introduced onto the market, the pharmacist must continually learn in order to keep current with all the new developments.

There are many private organizations, institutes of higher education, and online schools that offer pharmacy technician certification programs and some large retail pharmacies also offer internal training programs which prepare their employees for certification.

Pharmacy technician training includes gaining knowledge in the correct way to handle private patient information; the day-to-day operations of a pharmacy; how to process insurance claims; pharmacy record keeping; an awareness of prescription requirements; how to fill prescriptions.

Once the training course has been passed, the graduate will need to sit for and pass a standardized test called the ExPCT which is administered by the Pharmacy Technician Certification Board.

When it comes to the pharmacist vs pharmacy technician employment outlook, employment growth is set to grow for both professions. Overall, healthcare professions are growing throughout theUSdue to the baby-boomer generation now reaching an age in which they will require more nursing and more medications. Both industries are expected to show phenomenal growth in the 2010 – 2020 decade, with the need for pharmacists growing by 25% per annum and that of pharmacy technicians growing by approximately 32%, both of which are higher than the national average.

As has clearly been shown in the above article, when it comes to pharmacist vs pharmacy technician there are many similarities and also many differences, in the education required, the job and the salary. Whichever one you decide to become will depend on your own interests, needs, and financial situation, so do your research and enable yourself to make an informed decision that way as to what would best suit you.

In the pharmacist vs pharmacy technician debate the financial gain is much greater on the pharmacist side, and this costs money for many years of study, which puts many individuals off, but there are many financial aids available to pharmacy students, so if that is really what you want to do, do not let anything stop you!

Differences Between A Pharmacy Technician And A Pharmacist

What Is Involved In Becoming A Disability Social Worker?

Being A Volunteer EMT

Access To Treatment With Social Work And Substance Abuse

How To Get LPN Training Online Through OpenCourseWare Programs