LPNs in the army have different things to learn and cope with than LPNs from any other walk of life. Consequently there are a number of things that you will need to know about being an LPN in the army that you may not have yet been taught as an LPN in any other area of nursing. The job is highly intensive and you may even be required to enter combat situations as an army LPN. There are few areas of the world, however, that need trained medical professionals more than those areas where there is a war. Consequently, if you have what it takes to be an LPN in the army, you will always be in high demand as your skills will be sought after. To be an LPN in the army you need to be prepared to leave home for long periods of time, just as any soldier would have to do. This can put strain on relationships and other commitments, something that you must be aware of before taking on the job.

Requirements And How To Become An Army LPN

To become an LPN in the army you will need:

There are three main steps that you need to follow in order to become an LPN in the army:

Firstly you need to become an LPN. To do this you will have to complete LPN training at an accredited school. Schools are accredited by your state’s board of nursing, so their website is a good place to start your search. These courses are often offered by your local community college and consist of theory and practical work. Your training course will take about a year to complete. Complete the coursework and take the NCLEX-PN examination. 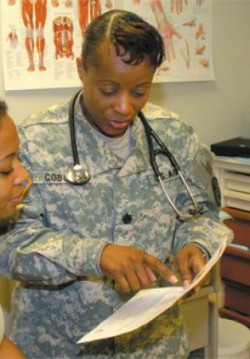 The second step is not always necessary, but it is suggested that you become an RN before applying to join the army as this will increase your chances of being accepted for the job. To do this you will have to get a minimum of an associate’s degree in nursing. You will also have to take the RN examination which is known as the NCLEX-RN exam.

After you have done all that it is time to apply with your local army recruiter and complete the tests, and so on, that are required in order to determine your suitability for the army.

You will essentially be a soldier that has nursing skills and the tasks and duties that you perform will mostly be very similar to the tasks and duties that every other LPN would perform, expect that it would happen in a military environment with a few small changes. This specialization is quite similar to being an emergency LPN in a regular hospital setting as your main purpose will be to provide soldiers with any emergency medical care that they may need. This includes:

This will require many of the skills that you will also require in other nursing settings.

In times of war field hospitals are set up in various places around the world in order to tend to injured and ill soldiers. With your nursing and 68WM6 (Health Care Specialist, LPN) MOS qualifications you will be able to work in any one of these settings at any place in the world. Army care can also be done domestically at army training facilities as training can also lead to injuries that may require the assistance of a trained nursing professional. The job is intensive and dangerous and will frequently take you far away from your home.

How Is LPN Army Training Different From Regular LPN Training?

There are a few differences in the training that you will do as an LPN who wants to join the army, but they are relatively small. To be an LPN in the army you will first have to do the 68WM6 (Health Care Specialist, LPN) MOS training before you do specific LPN army training (which is in addition to the training that you have previously done to become an LPN in the first place) which takes around 16 weeks and takes place at Fort Sam Houston, Texas. There are three phases, according to thecaringnurses.org, to this training:

Most of the work that you will study will be the same as what you would study in just about any LPN program for any nursing specialty anywhere. There will be a slightly stronger focus on emergency responses and a degree of combat training as well.

Benefits Of training To Be An LPN In The Army

If you have the 68WM6 (Health Care Specialist, LPN) MOS there are a number of advantages that you will be able to experience:

What Is The Job Outlook And Salary For LPNs In The Army?

The job outlook for LPNs in the army is very good. Even if there is a time of peace (which we should all hope for), the army still needs to be maintained and soldiers need to have trained medical professionals on hand even when they are not on active duty. In addition the skills that you learn in army nurse training will equip you to perform better in practically every other nursing job in existence, which means that you will be in high demand across the board. Having this qualification more or less guarantees that you will always be able to find employment.

Average salaries for LPNs working in the army are around $30000. There are, however, a number of subtle differences in pay depending on your level of education. If you are a licensed practical nurse (which you are) you can expect to earn in the region of $32,000 a year. Likewise a vocational nurse (another term for a practical nurse) can earn around $29,000 a year (this is mostly due to state differences as LVNs work in only one or two states while the term used in most other states is LPN). If you status is a health technician in the army you can earn $34,000 a year.

There are many different areas in which you can specialize once you have an LPN qualification, and they are many and diverse. There is no obligation to continue with your LPN army training if you feel that you are not cut out for t. however, if you are cut out for it, go for it! There are many places in the world where your skills as an LPN in the army are sorely needed, and you will therefore be in high demand. In addition you will be able to get other LPN jobs fairly easily once you return from a war situation or once you decide to leave the LPN army sector. Having worked in an army setting you will be seen as a nurse that can handle pressure and work in very organized and controlled settings where procedures are followed rigidly. These are quite good skills to have in practically all areas of LPN nursing, so this will stand you in good stead when it comes to looking for another job. LPNs in the army are often a sector of the nursing industry that are overlooked and should be given more recognition for the stressful and highly necessary work that they choose to do across the globe.

EMT Grants For What Would Be Pricey Tuition

The Need For CNA Scholarships

The Skills Required To Be A Social Worker

Upgrading To An RN Degree

Going From LPN To ADN

What It Takes To Be A Clinical Medical Assistant

An Overview Of The RN Certification Exam